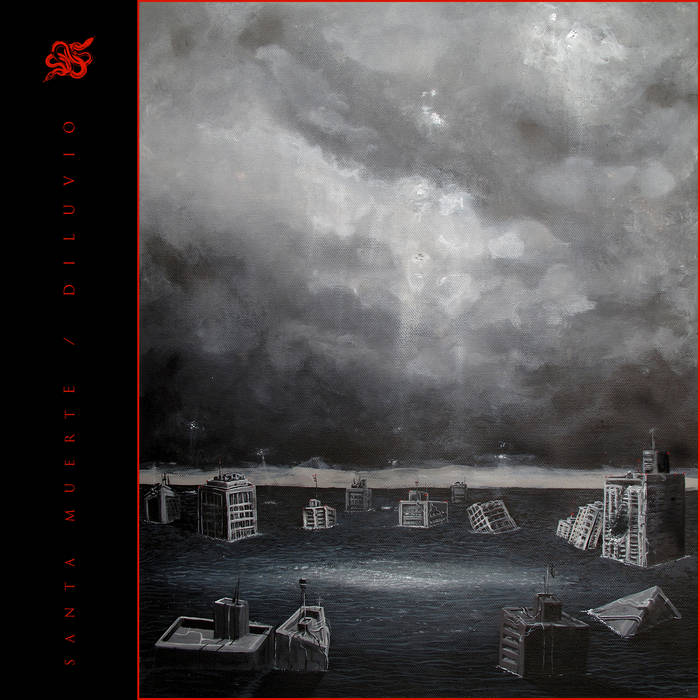 Houston-based production duo Santa Muerte return with their new album, Diluvio, dropping August 23rd on their MAJÍA imprint. Signifying the story of Noah’s Arc and the great flood, Diluvio points to endings and beginnings– only this time the cycle is self-determined by Santa Muerte, marking their own before and after as they embrace their non-linear evolution as artists.


Comprised of Sines and PanchSM , Santa Muerte is a testament to the duo’s deep ties with the guttural sounds of the club underworld, balancing sensual perreo and frenetic grime references, while also not shying away from sonic allusions to worship of México’s cult of Holy Death that’s indicated in their namesake. In 2016, Santa Muerte released the critically-acclaimed EP Oraciones, which Remezcla called “a prayer to the reggaetón club gods” and “an earth-shattering devotional.” October 2018 Santa Muerte released a remix of Kelela’s “Bluff” released in October 2018 on Warp Records.


Recorded in Houston’s 3rd Ward under the guidance of engineer Noah Clough (NNOA), for Diluvio Santa Muerte dove into a new production style, incorporating Modular Texturizer, Ircam Audio processor, and Clouds in addition to FL Studio that has been the basis of their sound.


“Sin Lágrimas” sets the melancholy tone of the album, layering vocal snippets of crying and arpeggiated synths to introduce the texture of what’s to come. “Ritmo de Selva” (Jungle Rhythm), co-produced with San Gabriel Valley’s TenTwentySeven, weaves through guttural percussion and baile funk chants that continue into “Exus,” a carioca-inspired track with sub bass sharpened for the late night dance floor. “Diluvio,” co-produced with Monterrey’s Zutzut (N.A.A.F.I.), does justice to the epic folklore of its namesake, plunging into a percussive-heavy soundscape that further blurs lines between dancehall and reggaetón. "Aerial Rhythm" a 3 way collaboration with Lao (N.A.A.F.I) and new comer NNOA bring the rigid sound of spaced out grime vibes.


“Because Of U” is an instrumental version of a previous Santa Muerte track with Rules, unveiling deep, plush chords and melodies with trap-inspired drums implicitly making reference to one of their roots in Southern hip-hop. “Noah’s Pain” presents a meditative interlude describing the pain of being alive and being human, before cutting into the atmospheric “No Drip” pairing droney melodies with aggressive percussion. “Laceration” recalls baile funk samples with creeping melodies that have become the duo’s trademark signifier.